The Princess and the Frog at OneTrueMedia.com

Hypnodrama Workshop 2008: The Frog was confused by the new, unknown and unespected contact.
He withdrew in hymself and, from time to time, he would come out and observe that strange, bright being called Princess. There was a crossroad dragging him backwards and forwards at the same time. He didn't know yet that he wouldn't be the same anymore. He could sense something new, something less and less threatening. Then "curiosity" won. The tenacity of that gaze and of that flattery won. Being able to familiarise with the unknown...is a journey.
We fear that there might not be turning back but the journey happens inside us.
Eventually, the contact woke them both to an encounter inside them...
She. the Princess, was entering his dream...He, the Frog, was coming out of the sleep of unconsciousness... ...which became hands, and arms, and kiss... (by Hypnodrama's Workshop)

Make a video - it's fun, easy and free!
www.onetruemedia.com
Pubblicato da Unknown a 08:02 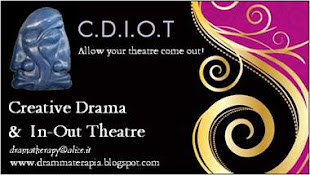